How is everyone? I hope you are well. It’s been a bit of an up and down week for me. No change there, then.

First up, writing. With the McOthers at home, in theory it should be difficult. In practise, while it sort of is, it’s not so bad, it’s more of a question of shaking down into a different routine and identifying when the best times to write are. Unfortunately, the best hour in the morning is the one I spend on the phone to Mum. Lock down is difficult when you have Important People to look after. And I do.

On the up side, thank goodness Dad didn’t have to live through this. He would not have enjoyed it. On the downside, by the time I see Mum again, she may be a very different person. In one respect, I feel I’m being robbed of her last months of sanity, in another, I phone her every day so it probably evens out. I just wish I could see her and give her a hug. I try not to think about that too much though, because that way sadness lies …

Despite comments on the apocalyptic nature of my home town it strikes me as surprisingly busy for somewhere with only a few shops open. One of them is Poundland, much to my amusement, but also relief because there’s nowhere else open where we can buy batteries.

Also despite being supposedly quiet, there’s still enough traffic about for there to be a car coming if you want to cross a road. Yes people. Every. Single. Fucking. Time. Today there was a MX5 in town driving round, and round, and round. Possibly in incredulity at the wealth of parking spaces – bloody hell! That’s amazing, I’ve never seen that before, I’ll have to go round again – I don’t know.

Maybe he was just enjoying an empty road. I have seen more policemen in town than ever before, too.

Managed to remember to cheer the NHS this week too. Yes, McMini and I stood outside cheering at the empty street, with a lighted light sabre each. Yeh. I was the fat one in the pyjamas. On the up side our presence brought the others out. Many houses on our street are rented and I think most of the renters are youngsters who have gone home to their parents. There are a lot of drawn curtains. Even so, people were out clapping and waving. Which was good, if only because it made me feel a bit less of a dick.

Fuck me but I’ve had some strange dreams this week. Unfortunately, they are continuing in my monotonous habit of dreaming about the lavatory. Not surprising I suppose, since it feels like the apocalypse. But I was hoping that I might, at some point, get away with a dream about something, anything other than having a dump. But no. I dreamt I was back at school. It was the first senior school I attended, for two years, when I was eleven/twelve and twelve/thirteen. I had ventured up onto the top floor where the third fourth and fifth form classrooms were situated, where the big, older scary girls were when I actually went there. I saw again the polished linoleum tiles, the pastel shades of the walls, the glass windows into the corridor from the classrooms. Yet despite feeling that familiar attack of butterflies as I entered the scary senior domain, I was also an adult. I was there about my son and I had to see his teacher. While we were chatting I suddenly realised I needed a wee. It was all going rather well so I asked and was directed to the staff loos.

But the staff loos were one loo, with a bath and basin too, like someone’s bathroom. The bath, loo and basin were a very unpleasant shade of 1970s pink. Yikes. But at least it wasn’t that horrible brown, or avocado. Also, there was washing hanging up to dry on the towel rails, hanging from clothes airers above my head, on the radiator, the side of the basin … literally everywhere. I remember thinking that the teachers must live in.

So there I was dreaming a dream and, Lo! Just for a change, I’ve ended up in the fucking bog. As I sat down on the pan part of me was fully engaged in the dream, but another part of me was aware that I was dreaming. Was I going to get away with an unembarrassing wee? Of course I bloody wasn’t. This was my warped dream. So naturally I did an absolutely enormous poo. When I stood up, I banged my head on one of the clothes airers hanging above me and knocked the contents into the pan. With my crap. So then I had to run some water in the bath, fizz it up with liquid soap, and scoop the once clean clothes out of the excrement infested bog and into the bath. I kept flushing the loo but there were more and more clothes falling in there from somewhere. God knows what I’d unleashed. Probably a hole in space time where other people’s washing was falling through a worm hole from alternative universes into a bog full of my crap. But it was chuffing weird.

What the fuck is going on?

I remember being conscious that I was dreaming, and wondering why the sod I can’t just dream about falling or flying or something a bit more fucking normal. I had, near enough, sorted it out, got the clothes into the bath to rewash and hang up again, although there were more and more in the loo, falling through the worm hole or wherever they were coming from. But I’d flushed it, so at least the poo was gone and for all it being bog water, it was clean bog water – yeh I know but this was dream thinking right, not real world how MTM thinks. I woke up before the dream ended. Which was, frankly, a bit of a chuffing relief.

So there we go. More dreams about shit. I suppose it’s not surprising, I mean, we are living it. Which reminds me. How’s your apocalypse going? Still no zombies here in Blighty. As I’ve said before, every cloud has a silver lining. 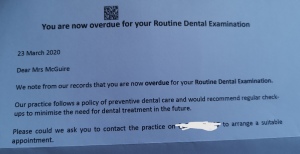 In COVID:19 madness this week the prize goes to my dentist’s surgery. Normally a highly efficient outfit, I arrived at my appointment for a check up, the Monday before lockdown, to discover that they had cancelled everything. To give them their due, my phone had gone weird that morning so I didn’t receive a call. But after a brief chat, during which they explained that they couldn’t book a new appointment because … COVID. I returned home, teeth unchecked with all appointments cancelled until further notice. Goodness knows who sends out their mail for them, but they’re being ripped off. A few days later, I received letters warning me that I was now due for a check up and must ring them at once. Interestingly, as well as the check up there was one about the hygienist’s appointment, which they’d cancelled the preceding Friday. I hope the mailing service isn’t going to bill them for this!

On the writing front, I’ve things to work on and edit, which are going OK, except I’ve reached that bit where you know it isn’t ready yet. And seeing how much there is to do, you sort of lose the will to live and put it away for a couple of weeks. While I’m a bit meh over existing stuff, I thought I’d like to start a new K’Barthan short because I only have two in hand. It should be easy enough, it usually is but can I?

Everything I try to write is about the bloody apocalypse. I’ve just watched an evening of BBC comedy delivered direct from people’s homes. Have I Got News For You by webcam for heaven’s sake. Impressive, and strangely intimate, coming from the panelists actual homes, but also at stratospherically lord-in-heaven-what-is-happening levels of weird. I really think living this apocalyptic shite is enough, without writing about it as well. Only one thing to do then, I’ve let my efforts to feed back on the fourth audio book bleed into the writing time. Although the huge door stop length novel which might be another series is also getting my attention, even though I’m sure it’s wrong and I don’t really know how to fix it.

On the subject of audiobooks … I had a bit of a crisis of confidence last week. I’ve two uploaded to a bunch of the main sites and they are gradually going live, plus the short  … but the other two are still in editing. I could hear a lot more breathing, but not normal breathing, kind of chopped off half breaths. I was a bit worried that, maybe I was just suffering the effects of syringing your ears half way through proofing four audiobooks. I asked but Gareth says no. Turns out they might be different and it’s something to do with the way you dampen the breathing and plosives when you’re recording. Something called sound gate – sounds like a press scandal, only it isn’t. Too much in one direction and you lose the ends of words and it sounds a bit weird. Too much the other and you get oddly chopped off half breaths. This has happened much more in three and four than in one and two. So I’m going through flagging them up. I’ve done three, but it’s taking ages and it felt a bit pissy. Like repeatedly kicking someone who has actually been very kind to me. Worse, I wasn’t 100% sure it wasn’t just a side effect of having my ears syringed. But Gareth assures me that flagging them all isn’t pissy; that it will help him work out the right settings and that he’ll learn stuff. I heartily hope so.

There are lots to mark up so it’s taking some time. On the other hand, I am really enjoying listening. Some of the voices … there’s a character called Psycho Dave. Gareth’s voice for this guy is genius and it makes me guffaw like a supervillain each time I hear it. Indeed, every time Dave appears, I get the giggles and have to stop. So I’m hopeful that other folks will find it funny. To go with, I need to sort out some email sequences; one for people who sign up after seeing a facebook ad, who don’t know about my stuff at all, one for people who are already familiar with the entire gamut of K’Barthan nuttery who just want to know when the audio books are out and one for the folks, between those two, who know about the books and K’Barth but would be intrigued to know more about the whole audio process and about Gareth. It’s going to take me a while. I’m getting there.

In the meantime, I’m on chapter 32 of book four, so moving, but not quickly. Yeh, patience my young paduan. My aim is to do as many chapters as possible a day, mostly from 10.30 until midnight after McOther has gone to bed. My efforts in this are being hampered a little by McMini who came down to seem me a few nights ago because his bed warmers had got cold. I nuked them to warm them up, which takes four minutes, and while they cooked, so to speak, we had a chat. It was a good one, so good that he now comes down every night at about eleven pm, ostensively to have the wheaties heated up but really, just to have a chat. It isn’t helping with my productivity, but he’s such a sweetheart and such good company. How can I refuse? Ho hum, onwards and upwards.