OK so there’s a lot I haven’t done but I’m feeling productive. I’ve managed to do some housework, some book marketing (more on that story later) and some writing. I’ve done some work on the model I’m building – a Lancaster Bomber which my son abandoned. I’ve also managed to take 12 used deodourant sticks, take the quarter of an inch of deodourant that ends up below the rim of the plastic casing and meld them into another one and a half deodourant sticks. Don’t ask me why I do this, or how because it makes me look even more weird and OCD than I already am.

The writing was fun, indeed the reason this is late is because these over verbose bloatings take me about three hours to write and instead of doing it yesterday, when I was supposed to, I did a real, professional day’s writing; at least an hour on three separate projects. I’ve also managed to do some weights and keep my walking up, although only half hour a day for most of this week as I’ve been a bit busy. The weights are good though. After 8 years going to the gym, I have a fair few exercises designed for arms and stomachs which I can do on a Swiss Ball. It’s early days, but my triceps are feeling stiff so with any luck it’s doing something.

Any weight lost? Nah, but I haven’t gained any either so I’ll take that as a win. Woot.

Making a tit of myself.

A few weeks ago, I was chatting to an author friend and she tipped me the nod about a virtual book fair that was being put on by the lovely folks at Our Own Write. This seemed like a great idea so I signed up, only to discover that in order to do the virtual book fair, I had to do a half hour virtual spot on … twitter!

Gads. But I never use twitter! I try but it’s an impenetrable wall of noise, I find it impossible to find anything. Even if I put hashtags in I just get a wall of posts from people I don’t know. Finding my actual friends there, and talking to them, is really hard. At least I can read my facebook feed and see stuff that’s been posted by people I’m following. Twitter? Nah. It’s all influencers and Americans I’ve never heard of. People it thinks I’d like to hear from, rather than the ones I actually would, ie the folks I’m actually following. It’s like trying to find a comment from a friend on the most obscure article in existence on the BBC news site. I must be doing it wrong but so far, I’ve failed to figure it out over all but I seem to be able to take little bites here and there. That said, these posts all go to twitter once a week and people can tweet me if they want to, at which point, twitter does usually tell me.

Anyway, having dumped myself comprehensively in the soup, on a platform where I have no following with tech about which I was clueless there was only one thing for it. I was going to have to try and attain bluffer’s level Twitter, learnhow to make a live broadcast and then, you know, do it. Luckily another author friend was taking part in the book fair too and she had the slot before me so in the days running up to it we exchanged notes and lessons learned which was handy.

Because these times feel a bit apocalyptic, the obvious choice was something that poked a bit of light hearted fun at apocalyptic/disaster movies. So I chose Escape From B-Movie Hell … partly because of that and partly because escaping from the b-movie hell we are in quite now probably holds a fair amount of appeal to many folks right now.

The learning curve was all quite daunting but surprisingly fun!

The first thing I discovered is that to live broadcast on Twitter you must connect it to another app, specifically for broadcasting, called Periscope. Having downloaded and joined up Periscope, that was relatively straightforward. You have to use a phone or a tablet, but at the same time, not my iPad Pro, it seems. That just hung. Never mind, the phone it was. So far so good.

Once I’d done that it was time to experiment. What I planned to do was write a hello and welcome to my spot tweet with all the hash tags people would need to link it to the virtual book fair. Then I had to click on the photo icon as if I was going to add a photo to my tweet. The first icon in my gallery is a picture of a camera, click that, click go live and it’ll connect and Bob’s your uncle. I’m live. Except on the day, I guess I was in a bit of a panic because … aaaaaaargh! It didn’t happen. I could not get Twitter and Periscope to talk to each other.

When you try and do this back the other way, Periscope does send your stuff to Twitter, but you can’t put in the hashtags so nobody who is searching for the VirtualBookFair hashtag was going to find my broadcast. However, my slot had started and therefore, by hook or by crook, I had to. So there was only one thing to do, I was going to have to broadcast my slot on Periscope. Periscope which I had only just joined three days before, where I had one follower.

Luckily that ONE follower was my lovely author friend Rachel Churcher and to my eternal gratitude, she shared my live broadcast with all the right hash tags on her feed … and then the lovely folks at Our Own Write shared it on theirs, I think, so after a few minutes stalling, while I waited for someone, anyone to be listening, finally people started to arrive.

Anyway, if you like that sort of thing, you can witness this car-crash of an episode by clicking this link – oooh Twitter has given me a special preview box. Well anyway, if you’re game for a laugh you can have a listen there … apologies to Diana who has already sought it out and listened after last week, definitely an A plus there Diana, and no homework this week, because you’ve done it in advance! Mwahahahahrgh! Sorry I was going t post the link wasn’t I? Yeh, so if you want to watch it’s here:

#VirtualBookFair Here is my interview thanks everyone for joining me and apologies that I couldn’t get it to work. https://t.co/DY0JCkXeyH

Lessons learned? Well, despite the rank fear, it was great fun. The people who showed up to my broadcast were lovely and asked me some really interesting questions. I also have those tiny initial rumblings of a thought that suggest I might end up writing another book about Andi Turbot and the Threeps. I’m definitely feeling light hearted enough to give it a go at the moment.

On top of that, I really enjoyed learning a new skill. A skill I think I may be able to use. For a while now, I’ve been thinking I need a podcast, and what better thing than just reading these posts aloud? They are all about fifteen to twenty minutes read aloud and after doing my live broadcast I am a lot more confident that I could do that. The idea of using a proper piece of software is extremely daunting … it’s all levels and audio gain and a microphone and … maths. Even so, I may use a proper piece of software, record them and then put them out as a podcast, or I may just do them as twitter broadcasts and attach my Periscope account to Facebook and YouTube as well. I do need to do something to reach the audio people though.

What else did I learn? That most people use Periscope for evangelism. That some people just stare at the screen, I swear there were a couple of broadcasts I happened upon where, to all intents and purposes, the person appeared not to know they were broadcasting. There are some which are clearly groups of mates having a chat. And there are ladies … yes it seems to be a hotbed of home strippers. Or possibly they are just videoing themselves having a J Arthur. It’s difficult to tell because I’m not bloody hanging round long enough to find out.

Other joy … I have some book promos on 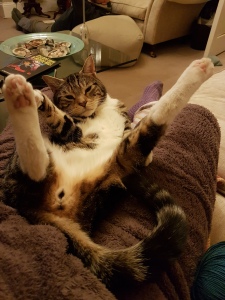 Relax with a good book … or relax with one of mine, the choice is yours.

This week our lovely friends at Kobo are running a 40% off Box Set sale. Naturally the K’Barthan Series is in it so if you do Kobo, it’s worth nipping over for a look. It’s not just my book, it’s a whole load of Box Sets and you can buy as many as you like so if that’s a thing that interests you click this lovely link here. None of them will look as if they’re reduced but if you enter this code at check out APRILSAVE it should take off 40%.

Also to go with the VirtualBookFair, Escape From B-Movie Hell is reduced to the nearest equivalent to $2.99 in all currencies. So if anyone’s interested in reading that, this might be the time to pick up a copy cheap.

That said … ALL my books are available in the major public library apps. While unfortunately, you can’t ask a librarian to get a paperback version in because all the libraries are closed, their apps are alive and well and … seeing a 35% uplift in new users apparently. So where your library lets you, you can borrow all my books for nothing, but I still get a payment. Win-win.

OK don’t get too excited – but anything is a surprise because they’re not all up for sale so I’m not marketing them yet.

Three of the four audiobooks – and Unlucky Dip – are live on Findaway Voices and Unlucky Dip is live on ACX. Obviously it will be three months or more before the others get approved on ACX, which is one of the reasons they are on Findaway as well. That and because it’s Findaway that supplies them to public libraries.

Anyway, ACX has reported that I have royalties due on Unlucky Dip but I cannot for the life of me discover what I do to find out how much. To my delight, Findaway also reported a library borrow of Unlucky Dip, which means Gareth and I have earned the princely sum of 16 pence each.

Upon hearing this news Gareth’s reaction was, ‘finally that private island is in sight.’ Mwahahaargh! While McOther said, ‘I guess I’d better hold off from ordering that Aston Martin for another couple of weeks, then.’ But hey, as I said, I’ve done zero marketing so far, and these are not books that sell themselves. I’m not going to be uploading a book to Amazon, going away and discovering, two weeks later, that 50,000 people have downloaded it. That has happened to some authors, but my stuff … nah, I have to work for every sale I make. So if someone buys one without any input from me that’s a pretty good start.

In another happy chance, Playster says it sometimes gives audiobooks a rating before customers do in cases where their editors like them. I see that all the ones I have on there so far have been given four stars, which is nice. It may just come from the book ratings as my books are on there, too. Whatever it is, I’m chuffed.