Shiny things and other news!

Apologies for my sudden absence last week, I was on holiday – woot. I meant to write something but when the time came, I wasn’t so inspired. Portugal was lovely, as always, although on the down side, I failed to score any Don Rodrigo this year, which was a blow. I should point out that Don Rodrigo is not a bloke or drugs but is, in fact, this weird Algarvian pudding. Imagine Baklava, you know, the ones that look like shredded wheat, but the shredded wheat bit is made with egg. Egg they’ve extruded and done odd stuff to, good stuff, but odd nonetheless. That’s Don Rodrigo, it’s like … I dunno … deconstructed custard, but it’s Oh so much more than that! It is one of my favourite things. McMini and I have even made a rap type song about it because we’re both nuts.

We had some fantastic pork and clams, fish stew, piri-piri chicken, and other general om-nomess, the sun was out, and I did loads of work. Work on holiday? I hear you cry. Well, yes, but then, my job doesn’t feel like work, so it was more of a case of it being a holiday from Real Life to have some fun. Indeed, I managed to finish the next short in the series, which was weighing at a measly 10k and needed to be 15 or more. It’s now up to 19 with an added twist. I managed to sort out one that was done but … you know, not done. Although that went up from 20k to 26k. Then I tidied up the one between.  McMini was hugely pleased when McOther gave him his old flippers. So pleased that for the first couple of days he wore them as slippers.

Also, I was delighted to find I was able to eyebomb the Zamboni at Faro airport. McOther refused to wait, initially. Then as we sat outside on a bench outside the terminal while McMini finished his lunch he relented.

‘Just five minutes, and if you get arrested, we’re not coming to bail you out.’

Anyway, I meant to post something a bit more meaningful today but things have overtaken me and I’ve got distracted by shiny things again. Mind you, since I’m here, I feel I may as well share some of the shininess with you.

First up; the audiobook, MTM starts fidgeting and jiggling about with poorly suppressed excitement and glee. Last night Gareth The Voice sent me the recording of Few Are Chosen to listen to. It’s the weekend, and I have things to do and Real Life to interact with but I managed to get to chapter 17 as I wandered round the market. The first appearance of Humbert made me laugh out loud and the good burghers of Bury St Edmunds  around me stepped gingerly away from the mad woman guffawing to herself! My early first impression is a good one. I still can’t quite believe that a person with a voice that’s so totally right for the story has popped up out of nowhere, unbidden. Then again, Gareth is a bright bloke and he’s probably smart enough to pick something that his voice fits. I’m just delighted it was my stuff.

There could have been a lot of auditioning, even if I’d had anything approaching the money, and it had been on the radar. And while it could have been a lady or a man, I would have spent ages trying to find the right person. Instead, he finds me. I have been an unbelievably jammy bleeder in this respect.

It feels as if, finally, when the unicorn farted, I contrived to be vaguely downwind. Mmm. Go me. Phnark.

It’s a really intriguing process, and kind of nerve racking in a way, so, for example, Gareth’s Lord Vernon is kind of a cross between Donald Pleasance doing Blowfeldt, with a dash of Peter Cushing saying, ‘you may fire hwhen ready,’ in Star Wars. It’s quite strange because it’s not quite how I imagined it, but bloody hell it works. He sounds so fucking evil! Mwahahahahrgh! Several folks who have listened to Unlucky Dip since I posted it here thought Gareth had Big Merv and The Pan bang on, too.

Second, yesterday, I managed to sort out this year’s, or at least, next year’s EyebombThereforeIAm calendar. I’ve used the prize money I won in the photographic competition and had 100 copies printed. So far, I have offered to sell it and split the profit with three separate entities. Hopefully that should account for all 100. Having them printed up front does give me a chance of actually getting somewhere with them because it’s cheaper so I can sell them for £10.99 rather than having to sell them for £16.99 to make 99p profit. I think I may have misspelled instagram in the blurb on the back though. Such is life. It wouldn’t be me if I got this stuff 100% right it seems. 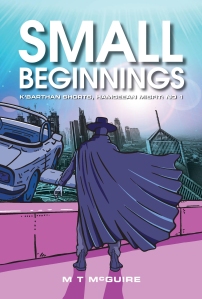 Third, the next instalment of the Hamgeean Misfit series of shorts should be ready for editing by the middle of next week. Indeed the only thing that’s stopping it at the moment is my usual chronic lack of cash. I’m hoping to have it ready for sale by January though, since it’s sort of, about Christmas really, but a midwinter-ish release date is fine.

Fourth, Future Adventures seems to be doing well, I am loving it anyway, but other readers seem to have enjoyed the book I put in and have bought the others. There’s been a significant uplift in income this month … or to put it another way, there’s been some, and I can’t think of anything else that would be responsible. Whoopeee!

On the home front, we are ramping up for Dad’s memorial service, not next week but the week after. It should be fun as it will just be a celebration more than anything. A group of people standing around telling silly stories about him. When I think about Dad now, I am just overjoyed to have known such a lovely chap, and unbelievably proud that he was my Dad. I do also feel that I have to step into his shoes, try harder at acts of random kindness and at being the voice of reason. I will post more about that soon, but I have to be in the right mood to write it up and at the moment I’m just too exuberant and excited about all the other stuff.

Yeh, another champagne week, I guess.

If you’re interested and missed it before, you can find out more about Future Adventures and Small Beginnings by clicking on the links, below:

If you click the Small Beginnings link and scroll down, you can also sign up to be informed when the other books in the series come out.

10 responses to “Shiny things and other news!”