Yes, you can polish a turd… if you light it well.

— Caveat, the whole point to the less is more bit of this post was that the prop under discussion was the one used in the actual series of Dr Who. It wasn’t. It was built by a fan. Looking at the equipment available to the BBC props department and a chap in a shed, the whole perspective suddenly changes. Basically, a 19 year old lad has made something, himself, that I thought was an actual BBC prop. So it’s more on the freaking awesome level than what I call it. So what I say about attention to detail still stands but actually, the example might just as well be made up. So there you are. Check your facts. All of them. Even the ones you don’t even realise need checking. —

This week has been half term so all meaningful work on K’Barthan things has dropped in favour of doing stuff with the ankle biter. We went to a sci-fi exhibition at the local museum, great fun, and opened with a host of look a likes, Dr Who, Darth Vader, a rather handsome jedi knight, a cyberman, Boba Fett and McMini was pictured with all of them.

Inside the exibition they had the actual control console from the Tardis. There have been several, anyone with kids who remembers the beebatron on CBeebies, or who has subsequently seen Cari and David’s Pop Shop will know what happened to the one out of the 5th Doctor’s Tardis. The one in the exhibition was the current one. Here it is. So what do you notice? 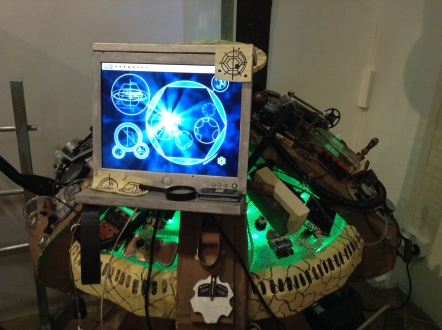 That’s right. It’s really shit. And close up, it looks like this?

So this is what amazed me; the difference between the way it appears on film and the way it looks close up.

On film: slick, sparkly and kind of steam punk with all that shiny brass and bits of 1960s telephones. Of solid, robust and more to the point cool.

And here’s the magic.

It doesn’t matter how hit looks close up because, it’s designed to be seen on film and the minute I take a picture it ceases to become a load of old tut and turns into to something else.

And what does this have to do with writing?

Well, my point is this. It’s easy to get hung up on world building and character back story when you write spec-fic. But what this teaches me, at any rate, is that the trick is not so much what you put in as what you leave out.

Yes, the Tardis Control Console looks terrible to the naked eye but on TV it looks bloody brilliant. Sometimes, less, or a hint, is more and the reader – or viewer’s – imagination does the rest. The secret is selecting the trigger details, the odd snippet here and there which people reading it will embellish for themselves. The real Gods are the writers who do that in a way that will have every reader seeing the same picture.

Filed under About My Writing, Blimey!

14 responses to “Yes, you can polish a turd… if you light it well.”