It’s been an interesting week this week. I did a lot of writing and discovered that I’ve spent the last three weeks going in the wrong direction. After that I went back to what I thought was square one and off in another direction, only to discover that was wrong, too. So now it’s back to another point where it went wrong. It feels right this time, though so I think it probably is and of the binned scenes, it’s probably the outcome of second one that’s right with a kind of mash up of the two beforehand.

So now I’ve managed about 800 words in what looks like it’s the right direction. I might have to sit down and do a time line or just work out how many plot threads I have before I go on though because it seems to be getting a bit hectic. And I so want the gunfight in the balloon factory where the helium canisters start leaking. I suspect I’m losing my grip on it because of the Mum thing, in which case, I need to make some kind of timeline/table of what happens when so I can lean on that and write it by numbers. Right now though, I’m just really enjoying writing it. Also, I’ve found a tracer I put in The Last Word that I’d forgotten about. I think I can use that to make it into something a bit longer, just another 12k or so to get it novella length.

I have also made a start on cataloguing my massive collection of sci-fi tat! That’s five items done so far. More on that story … next week … probably.

Other news, I’m going to be putting my author hat on (more on that story, in a moment) and going to two events this year to flog books. The first is St Albans comic-con in July, the second; Norcon (Norwich) in September. Several of us in my local authors’ group have booked a table so we can share the work, cover loo breaks and that kind of stuff. Also it’s much easier waxing lyrical about someone else’s books other than one’s own.

While we were discussing it a few weeks back the topic of cosplay came up.

Cosplay anyone? Er … no.

When people go to conventions, quite a lot of them dress up as their favourite sci-fi character. We discussed who we could be and whether going as characters from our books would be fun. The first question to me was, ‘Are you going as full Lord Vernon?’ Mwahahahargh!

Sadly, though I’m sorely tempted, I felt that the green face paint involved was probably a step too far. And suede gloves in July. A Big Merv-style suit with a light blue pinstripe was an option but it might make me look more like The Doctor.

The face is wrong but the hat’s right. Big Merv isn’t big enough either Mwahahahrg!

That left The Pan of Hamgee. He is my favourite character, except when I prefer one of the others, because they’re like kids. It’s hard to pick one. He also wears a hat, which is nice and distinctive; a cross between a Mel and Kim hat and a Zorro hat. Like Zorro he also wears a cloak, but it’s ankle length—unlike 1960s Zorro … although, did the Antonio Banderas version have a long cloak? Maybe he did. I can’t remember, anyway, onwards. The Pan wears a velvet jacket—I’m thinking the kind of gothic brass buttoned number you might have seen on members of Pink Floyd in the 1960s—and obviously the canvas jeans and elastic-sided boots. How much of this shizz do I have? Oh look! Everything except the hat! 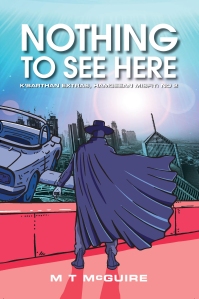 Hang on though.Does it fit?

First the shirt. Since my enormous, post baby, H-Cup boobs are too big to jemmy into any of my old shirts, I started with that. There are three vintage clothing shops in town, I found it at the second. It’s not quite as virulent as I’d hoped and it’s not silk, because silk paisley shirts are about 200 quid, but it’s dark blue cotton and perfectly good for this. If I find another one somewhere, I’ll buy that. In the meantime, job done I’d say. Next, I have the jeans and I also have some suede, elstic-sided boots. The most comfortable pair for a warm day is pink, which is the best that I can do.

Until I was about 40 I used to wear a hat every day. Usually a fedora, a wide brimmed trilby or a straw boater in the summer. I especially liked the hats worn by two stars called Mel and Kim in the 1980s but never bought one when they were ‘in’ and kicked myself for ever after.

However, a few years later at the Spanish/French border, I saw something very similar in the gift shop. I was on a coach trip and it was just a bathroom break so there wasn’t time to buy one—and they were too expensive anyway—but I did now know that Mel and Kim wore Spanish Flamenco Hats. Clearly then, since there is more than a hint that the original Zorro was hispanic, the Spanish Flamenco Hat would be the place to start.

A rigorous search on t’interweb revealed that yes there are such things and you can actually have one made for you for 120 Euros! Or you can buy one for 50 Euros. They were pretty much right but I couldn’t find a company that would ship to the UK … because bloody Brexit. Ugh. On the up side, there is a type of riding display where the horsemen and women wear these hats and there are sites selling them to horse people.

So then I thought what about Portugal … I mean, Britain’s oldest ally at 600 years and there’s the port logo right? The police officers mention that in The Wrong Stuff. So I googled, Portuguese traditional hat, and one of the things that came up was this. Oh my lord! Perfect. Even better it was a shade over 30 Euros from a Portuguese riding shop.

Yep. This, my friends, is a Bolero, one of the traditional hats of Portugal. It is also the hat worn by the geezer on the Sandyman port logo and the hat of choice if you want to look like Lee Van Cleef, or even Clint Eastwood, in The Good The Bad and The Ugly. Those are traditional Portuguese cowboy hats … totally different to the Texan thing, y’all but very much what you see them wear in the films.

Yeh. Well … the hat helps a lot. That’s the shirt.

Interestingly, while I was researching all of this, I discovered why the Sandyman port geezer has a cloak as well as a hat. This is not because he’s a cowboy—though a cloak would be practical to keep you and the horse warm and dry, Drizabone style. Nope. The Sandyman geezer is just a student. Mwahahahrgh! That hat and cloak is what Portuguese students wore when the logo was designed. They still do at some universities. I suspect the public image of port has altered somewhat since then, either that or students weren’t perennially brassic the way they are now.

It arrived in a huge box and since I was buying the hat I also bought a thing that looks like a clear plastic loo seat which keeps it flat and in shape … see below.

The correct way to wear it if you’re Portuguese is tilted to the left, if you are a British lady you’re supposed to tilt it to the right. I think I’ll wear mine going left the Portuguese way from now on.

I love that by pure happenstance The Pan’s father, the original owner of his cloak and hat—and lecturer at the University of Hamgee—turns out to have dressed as a Portuguese student. It kind of works too becuase in my mind’s eye, The Pan was always olive skinned until his blood went blue.

Other interesting factoid. Blood in its natural state actually IS blue at some stages in its journey round the body. It’s only when it hits the air and oxygenates that it goes red.

So there we are. Funny what you find out isn’t it?

On a different note …

If you’ve stumbled on this page looking for information about hats and are now wondering who on earth all these imaginary people are well … there are some books about that and they don’t even all cost money. Feel free to read one of the free ones if you’d like to give them a try. You can find a list of them, with links to buy them from the major stores, and mine, at the end of this smashing link here:

Tagged as an author with children, author blog, e-publishing, humour, I hate fucking tags especially now I have to do them one by one instead of cutting and pasting them from one blog post to another, K'Barth, K'Barthan Series, M T McGuire, The Pan of Hamgee, what the fuck do I tag this as?, writers