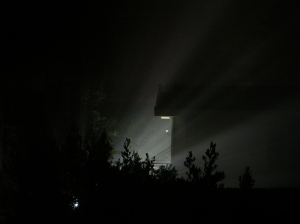 Eerie speaking to you from the past picture because I don’t have one of my face in the dark with a torch shining up at it.

Today through the magic of science I am speaking to you from the past. Yes, once again, as it’s half term, I’m actually typing this up about a week before it will be published. You remember a while back in this post, I was glossing over the miserable hash I’d made of achieving … well, anything much career-wise in 2017, and talking about what I intended to do in order to organise my time and projects. Half a term in, I thought it would be good time to take stock on how much of my shit I’ve actually got together.

Amazingly my plans for doing the pinger routine have worked extremely well. I feel in control and I have managed a bit of writing, or some work on my writing, most days. Yes, it took three weeks to get rid of Christmas properly and I haven’t done the thank you letters yet – although I’m working on those and I did do the parish magazine – but a routine does appear not only to be emerging but also to be actually sticking. I got rid of enough Christmas to start doing some writing by the last week of January but forgot to log the word counts until 5th Feb because I’m really smart like that. I am optimistic about the small slices thing though, so here is a quick update about each project and how it’s going.

There’s an outside chance I might finish this in 2018. I am currently on the third iteration. I wrote 19,933 words at the start of last year which were really just a load of getting-to-know-the-characters-rubbish but I might be able to turn some of them into a short. That was followed by a 48,982 second version. That was the point I decided to give the Joe Nassis plotting thing a try so I stopped, plotted it as best I could and had a go at writing it by numbers for Nano. I wrote about 32k of the new version for Nano (can’t remember the exact number but it was 25k in the first week) then this kicked off and I had to stop.

It reached 42,300 on Monday but it’s dropped to 41 something by today; I’ve been whipping it into shape a bit this week before moving onto the next bit. Bonus, I have managed to crack a difficult linking scene that was really frying my synapses in an interesting way. Touch and go if I finish this year but it is possible.

Setting Tripwires for Granny and other Tall Family Tales

This one had reached about 17,000 words by the end of 2017 and after a bit of a pause where the fiction took over I have taken it up again this week. There is a new and interesting twist in that I am beginning to think that I would be better splitting it to the family history stories in one volume and the ones about growing up in a school, and my dad, in another. So tripwires is up to 20571. Woot but some of that may end up in.

As opposed to Goodbye Mr Chips … another working title, obviously.

Talking to Mum and Dad recently, I realised they have made a lot of visits to the school where Dad taught and so I thought that some stories about Dad’s time working at the school would be a brilliant talking point and memory aide After contacting the school, bless them, they have emailed all the people they have on record who were in my dad’s house asking for stories or reminiscences about him. I have had some fantastic responses with wonderful tales about Dad and the school. He has had an absolute gas listening to Mum and the carers reading them to him. He has also enjoyed reminiscing about those times as it has brought back lots of memories. Even better, the exercise has also focused Mum, my brother and I on who he really is. It’s been amazing and I reckon that those, with the stories I remember added on, would make a cracking book on their own. After all, it’s basically characterisation with knobs on!

This one needs the same planning efforts done on it as I did on Traffic. After that I’ll be able to write that along with the others. As well as giving me more options to suit more moods, having more than one project on the go means I can chop and change if I get stuck, giving me time to let stuff settle and let the subconscious find ways to sort problems in a more interesting manner. Hoping to do that before We go skiing during the Spring Holidays, at which point I will have lots of time to write while the others ski.

This one is finished and waiting for a decent cover. I am taking a while because if I do it right, I can probably come up with an idea that ticks the boxes for a cover that looks interesting and has a person on it but which is also the type of generic scene that I can use more widely to promote the whole K’Barthan range of books; Series, Extras and Shorts, when I get my ads up and running again.

As Jump took just under a month to write I can’t help thinking that I should be able to do a couple of shorter books next year – things weighing in at about 20k or so – if I plan them first.

Top of the agenda for the next few weeks then, planning Space Dustmen and some shorts.

The book is still going nowhere but at the same time, I’m collecting more material every day, and I’ve set up a blog for them – . Also there has been some progress on other fronts. The Zazzle shop is finally tidied up – I think I mentioned that the other week. So there’s the mother shop for my art and then there’s one for eyebombing and one for K’Barthan/Hamgee University Press stuff. The main shop has ‘collections’ of the good in all the other shop. In addition, I’ve produced a set of 10 eyebombing cards and an eyebombing 2018 calendar. Next year I’ll be a bit more organised about that and might actually manage to do a 2019 calendar in advance. If you’re interested in any of that, you can find the link here:

My main Zazzle Shop with all the ‘collections’:  http://bit.ly/dbhonazzle

Sorry, I have to do a horrible bit.ly link because the affiliate code is a massive number, possibly 32 digits … well … OK … it’s about 16 but it’s not exactly snappy and easy for folks to remember. 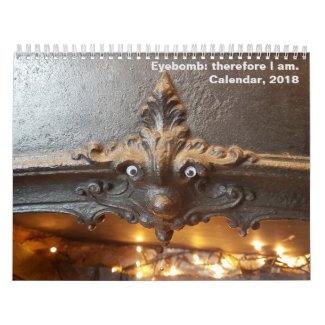 Meanwhile, the nascent blog, which, irritatingly, doesn’t tie into my instgram feed, is here: https://eyebomber.wordpress.com

Now I need to come up with a consistent name for my eyebombing exploits, work out which days of the week to post eyebombs and then remember to post them. Right now I’m doing that on Sundays and Wednesdays at UK lunch time; i.e. Australasian evening (mostly) and American morning (mostly).

There is also a domain name: http://www.eyebomber.co.uk – although at the moment it doesn’t point to anything.

The truth is, I’m having a real quandary trying to decide on a proper name. I really like, eyebombtheschoolrun because it’s quirky and fun but it’s also long and it only has two more years’ shelf life, after which point it will become a lie because McMini will walk to senior school or go on a bus.

There is also the option of eyebombthereforeIam (Eyebomb: therefore I am). That is more of an evergreen name and I love that, too, but it is still horribly long. I suspect, in the end, I will have to go for eyebombthereforeIam.com and change everything to that.

If I was actually Scottish it would be a no-brainer. I would call it http://www.ayebomb.co.uk – but I feel a bit of a charlatan claiming Scottish heritage if it’s only by association and marriage, rather than lineage. So … quiz time, what do you think I should call my eyebombing exploits?