It’s been an eventful week. In a move of incredible efficiency, the entire family my side managed to meet at my mum’s and clear out the junk in her barn and garage. There was a lot of junk. Imagine a room that’s hot and stuffy and packed to the gunwales with crap. Imagine four beds that have been left, untouched, for some years. Now imagine this in a building infested with mice, squirrels and other sundry vermin.

The cobwebs alone were epic, like something out of a film. You know, one of those films where you’d go,

‘Those cobwebs are a bit unrealistic, cobwebs never look like that in real life.’

The beds had been nibbled, pieces of newspaper had been dragged into them, the floor was about two inches thick with the desiccated carapace of wood lice that spiders had eaten. Everything had those little dots on which are, I’m afraid, spider poo – I discussed this on another post somewhere didn’t I, the one about the toboggan. Everything else was covered in mouse droppings. The squirrels had left hazelnuts all over the shop and their … er hem … motions … had left a kind of stodgy stinky pile in the middle of the floor.

And this is the crap that came out.

McOther found a dead mouse and the skeleton of a squirrel. There were also two lots of cat poo which must have been from my parents’ old cat, Abbie, who died in the mid 1990s. They were rock hard, anyway. The beds and mattresses were unbelievably vile. The stuff of nightmares.

After a day of sweeping, scrubbing and heavy lifting we ended up with a massive pile of rubbish and a clear top barn.

We bought hazmat suits but ended up not wearing them. It was too hot. Although I did use a smog mask for sweeping out and wore gloves at all times, three pairs of surgical gloves at once in fact. The dust while sweeping was horrible and I mentioned the cobwebs didn’t I? Shudders.

After a very busy day, we all went home and the lovely chap from the local skip company turned up with a van to take it all away the next morning. Turns out there are two loads so he took the first one and is coming back for the remains of it on Tuesday. We put the few items being kept back in the barn. Highlights included:

Two old bed pans, a baby weighing scale from about 1910, some early 20th century skis, an ice pick that looked about contemporary with Scot’s trip to the Antarctic and an ancient crane, probably from about the same era as the baby weighing scale. When we arrived home they’d shut our street to do resurfacing work. The only way to get to our drive was by going the wrong way down two one way streets. That was interesting.

On Thursday, after we’d arrived home, McMini took delivery of a gun that fires small gel balls, like those things flowers sometimes come in. They arrive tiny and you put them in water and watch them grow. McMini assures me they disappear eventually but for the time being they’re all over the garden. After waiting several hours for the first packet of balls to hydrate I was liberally strafed as I went about my business. Meanwhile, I browsed the net and picked up some more stuff for McOther’s birthday, things he doesn’t realise he’ll be receiving.

Needless to say, I got far too engrossed in this and while scoring a whole bunch of things I think he’ll like I completely forgot about some other stuff like time and McMini’s Boys’ Brigade band practise. I realised twenty minutes before, when it was far too late to give him food. I managed to make a hasty chicken roll and gave him a bowl of olives but we were late. So much for being smug about McOther’s birthday gifts.

McMini dropped off, I came home and discovered my ancient Wilkinson’s ‘greenhouse’ listing at a worrying angle. Further investigation showed it was in trouble and probably about to collapse. While I wondered which of the tomato plants to take out first the ‘shelf’ gave up the ghost, dumping four of them all onto the ground below.

To be honest, I was worried it might not make it through this growing season. It’s little more than a metal frame with a plastic cover over it so the fact it’s lasted five years, at least, is a minor miracle. I got the tomatoes out but then had to go back and collect McMini and leave them to their fate. Needless to say, it took a whole day to sort them out. On the upside, two of the four plants came out reasonably OK, if battered. The others are bollocksed but who knows, they might perk up. Luckily, McOther was cooking that night and McMini did get to eat, he just had to eat with us rather than beforehand.

As you can imagine, rebuilding the ‘greenhouse’ so it wouldn’t fall down again took a sod of along time. Throughout the process I was strafed liberally, a second time, with the rest of the gel balls. McMini had hydrated all of them in a container that was only designed for half, luckily I happened on them as the balls began to expand their way out of the top and moved the frogspawn-like mess to a kilner jar.

Greenhouse fixed and tiny bouncy gel balls cleared up, it was time to dump the car off for … yikes … electrical repairs and then I left McMini at home and legged it up the hill to buy the ingredients for McOther’s birthday cake.

When I arrived home the presents McOther requested had arrived and I had to take an hour out to sit and feel smug about my incredible efficiency. OK so the others won’t arrive until Tuesday but you can’t win ’em all and he doesn’t know he’s getting those.

After a brief discussion with McOther this morning, he chose to have an orange and poppy seed cake. I decided I’d make muffins and then ice them with orange butter icing.

Why do I do these idiotic things? I’m a complete fucking bampot, that’s why.

It was a hot day and I learned a very Important Thing.

Sadly, I don’t know exactly which temperature it is, only that the air temperature in my kitchen was a tiny bit higher this afternoon. So the beautiful piped rosettes on the cakes began to melt, a factor which was probably exacerbated by my own impatience as the cakes were tepid rather than cold when I began. Note to self, put bastard cakes in fridge or let them cool long enough. 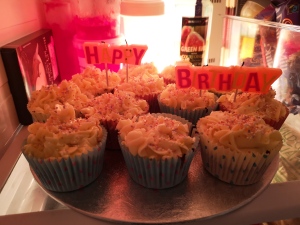 Naturally, I chronically underestimated the amount of icing required and as I only had one orange, there wasn’t enough orange juice left to make the second batch of icing orange-flavoured either so I had to use a lemon. I hurriedly reclaimed the squeezed orange rinds from the pot I’d stuffed them into, ready for the compost, and removed the last scrapings of zest – don’t do disgusting things like this at home kids. Two cakes later and I had to make a bastard third batch, not a nod to orange, that one, lemon only.

Cakes done, I realised the Happy Birthday candle I was going to use was broken but I did, at least, manage to glue it back together by melting the wax a little bit over the stove and then holding the two ends together until they stuck. Finally, I stuck it into the tray of cakes, covered the revolting mess with sprinkles and put the tray in the fridge.

Now I’m taking a couple of minutes to read, sitting in the evening sun, while nature pelts me with flying ants. That’s probably what I get for being egocentric enough to be sat here reading my own books. But there’s method in my madness. In order to get the continuity right in my upcoming series I have to re-read the old one so here I am.

Never mind, onwards and upwards, I’m going on my first dig of the autumn tomorrow. Here’s hoping I find something interesting.

How’s your week been? A little more restful than mine I hope.