How does this even happen?

Obviously there are points among the mayhem when I try to write a sensible post about something, but this week the madness continued so I felt I may as well just give in and tell you about it. To be honest, I was worried, a few weeks ago, that I was losing my sense of humour. The good lord has clearly decided to rectify this by making my life as surreal and bizarre as possible. The appreciation of oddity centre of my brain is definitely fully satisfied at the moment, anyway.

Huge relief this week. After a meeting with Dad’s home, his social worker and the community dementia nurse on Wednesday, they said they were happy with his progress and thought he was settling well. The manager of the home confirmed that they will be able to look after him permanently. Since we were happy with the home, too, this is a huge relief. They addressed most of the doubts or misgivings we had before we got to the asking questions stage which was also a good sign. The home are taking it slowly and letting Dad settle, he flips from charming to very much not charming and has to be placed carefully since he is able to raise his voice to the kinds of levels required to be heard by rowdy teenagers. As the manager pointed out, that kind of volume, like hearing someone play the bagpipes in a small room, can be a bit much for the other residents in a confined space.

At the moment they are working out who Dad gets on with and who he doesn’t. Residents with dementia do irritate each other from time to time, apparently. Like life then. But they’re more like kids so there’s a lot more of the kind of nursery school exchanges. Go away I don’t like you, you’re smelly etc.

A highlight was when the lovely lady who runs the home was trying to get into the computer system to show us Dad’s record. The meeting room was just off the main hall/lounge where everyone sits. She forgot her password. So she opened the door and called for one of the other staff.

‘She’s gone,’ said an elderly voice from a chair nearby. ‘She got into the taxi.’

The staff member appeared from the office next door and came in to join us. In the background I could hear a cheery commentary from the same resident.

‘Look! They’ve both got into the taxi.’

‘Oh,’ said someone else.

‘Yes, I don’t know where they think they’re going,’ said the first voice.

At another point I heard a resident shouting and then the familiar voice of Dad bellowing, ‘shut up!’

There was a slight pause in the meeting room.

It sounds a bit grim of me but I’m afraid I actually found it hilarious. Luckily everyone else laughed too.

If you want to survive stuff like this, I sincerely believe there is no other option than to see the funny side. Were he still wholly himself, I’m certain it’s what Dad would have done. There is something gloriously, surreally random about listening to a background of conversation between demented people. Furthermore, Dad is much more settled and much more aware so we are happier because he is and therefore, so is Mum. She is a bit of a worry. We are standing at the top of the hill we were on with Dad three years ago, except with her. I’m hoping the cajoling, the getting extra care and all the other baggage that comes with getting people the care they need, rather than the care they want, will be easier to handle the second time.

Business in casa McGuire is mayhem as usual.

McCat is behaving abominably. As if his complete obsession with my evening primrose oil capsules wasn’t enough, I turned my back on the kitchen work top this morning only to discover he’d leapt up there and was drinking the dregs of McOther’s tea. For the love of the almighty was there ever such a skanky cat? I swear he’s suffering from species dysmorphia because he is clearly a labrador. I have discovered that screaming at him makes him stop and run away, and it also clearly communicates to him that I am displeased and he’s been bad. It doesn’t stop him, though, because not only is he mischievous but he also has a sense of humour and I suspect he thinks it’s funny.

Midweek, a friend from way back rang up out of the blue. She was up here on business and asked if she could stay over. Yes she could, I said. So after a grim journey home from the care home on Wednesday – a lovely 39 minute delay at the Dartford Tunnel and other shenanigans – I got home a few minutes before she arrived.

We had supper and there was lots to talk about, we’re in very similar situations with elderly parents although it’s just mum in her case and we managed to talk the hind legs off every donkey in the vicinity until we realised it was one am. 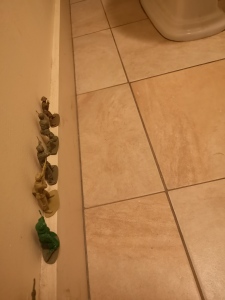 Nooo I forgot the soldiers in the bog!

I didn’t really think it through, since I had metal detecting club the next night and McOther is hoping to start a wine tasting group we had the first meeting round ours the night after. Long and short, I really can’t do late nights any more I have been recovering from Wednesday’s excesses all week.

When we had the wine group round, I spent the day trying to change my mindset to that of a person who does not live with a ten year old and to notice, and remove, some of the bizarre items that have come to rest around the house. A lot of nerf guns, bits of biro, headless action figures and other detritus later, I thought I had them all, only to discover, while having a nice relaxing wee during the wine evening, that I’d completely forgotten about the row of toy soldiers in the lavatory. Still, I suppose it could have been worse. The scale on our water here is brown and I did, at least, remember to give the lav a good treatment with descaler so it was mostly white.

Meanwhile, McOther had blithely imagined that he’d be home from work in time for us to eat a meal before the wine evening on Friday started. In fact, the first of our guests arrived about two minutes after McOther did. I chatted to him while McOther had a wee and unpacked his work bag before leaving McOther playing host and haring off up the hill in the car with McMini to Boy’s Brigade. Needless to say, because I have a tiny car and McMini is, himself, a microdot, he has elected to play the bass drum in the Boy’s Brigade band. To give him his due, he’s pretty good at it but it means I have to schlepp up the hill with it, or borrow McOther’s car. It’s only a matter of time before he takes up the double bass and the tuba I suspect … or possibly the euphonium or some other hugantic instrument I’ll need a luton van to ferry him about with.

On the recovery from my persistent socialising score, the fact it is the part of my monthly cycle which I privately refer to as Constipation and Brain Fog Week hasn’t helped either, but this time the brain fog and seems to have extended its sponge like caress, not just to my brain, but also to McMini’s.

On Fridays he has PE. Thank heavens he no longer has to go into school dressed in his kit, with his school clothes in a bag, but he tends to come home in his PE kit with his school uniform and school shoes stuffed into his bag. However, he also has Boy’s Brigade on Fridays so he has to put the school trousers and shirt back on again. Bless his heart, I took his uniform out of his PE bag, popped it on the sofa beside him without really looking at it and asked him to put it on. A few minutes later, I heard a shout of dismay.

‘These aren’t my trousers! They’re huge.’

He was standing in the middle of the room, sporting what looked like clown trousers. He held the waistband out from his stomach and there was, indeed, about three inches of extra room where, presumably, they usually sit snugly round a very much larger child. Luckily, I’d already washed the other pair of his own trousers and it was hanging over the airier in the utility room so I didn’t have to creep up the stairs on my shonky knees. Even more luckily, it was dry!

The week before last, he managed to get changed back into his school uniform but he came home with another child’s hoody. I didn’t find it for five days. The wee lad’s poor mum was probably wondering where the hell it was. At least I managed to wash it and get it back to her in time for the next PE lesson.

So now we have a pair of mystery trousers and some other child has McMini’s. As far as I recall, McMini’s are named, I’m not sure though, because he went through about six pairs in the first three weeks of term playing something which he called ‘human chess’ and so in the whirl of rapid acquisition and destruction of trousers I may not have named them. Still, I should thank the world for small mercies, I mean, it makes life interesting and at least he still has a pair to go to school in on Monday.

7 responses to “How does this even happen?”