There is a popular trope that being happy is just a state of mind. It’s a little more complicated than that, I suspect but I think there is something in the idea that trying to cultivate a positivity of outlook can help. For me it’s definitely about noticing things. Noticing the smell of hyacinths from the flower bed beside our back door. Noticing the way the birds start to sing way, way more loudly from January on. Noticing how even in December, the bulbs are starting to break through. If I wasn’t lucky enough to spot these signs of hope and spring, naturally, I suspect I would be a much less happy person. But once you’ve noticed this stuff once, maybe you look harder for it the next time? Who knows. 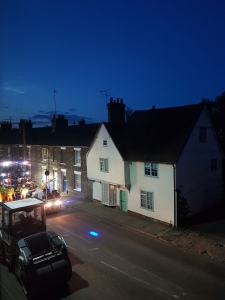 This week, has been … interesting. Really tough at times. Not helped by a dash of sleep deprivation; they resurfaced a bit of our street … at night and, apparently, with the help of the Mysterons. 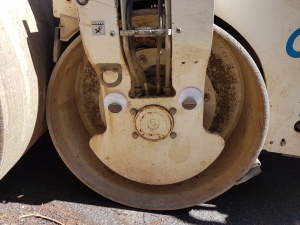 They also foolishly parked their rollers etc outside my house where I could eyebomb the living smeck out of them so there’s an upside to everything but …  after a couple of noisy nights mental energy was low by about Tuesday and by Wednesday I was running on fumes – no not my farts, I’m trying to say there wasn’t much fizz in the tank – and there was even less after I had to sort out a bit of a ‘situation’ at Mum and Dad’s. Suffice to say, I should be driving to Hexham right now to celebrate the 50th Birthdays of two lovely friends from school. And I’m not.

In my defence, it’s a five hour trip each way and after my uncle’s death, the night works and a furore (now sorted) that blew up around my parents this week, I decided that if I was being realistic, there were not enough spoons/fuel in the tank – my tank, not the car’s – to do 600 miles in bank holiday traffic. I cancelled. I feel bad about cancelling but sitting here right now, I know I’ve done the right thing.

Meanwhile alongside these it has been a week of small and unusual things. Lovely things that have lifted my spirits. Rare stuff. It’s strange how these things happen sometimes, often when the rest of your world is at its worst. Little mini-boosts that filter through to you, as if the world is trying to tell you, in it’s own small way, that despite feeling that you haven’t measured up, it’s alright.

First, an account from a friend of someone waxing lyrical about my intelligence – as in that she thought I had some – left me with a nice warm feeling. The Scottish man who served me at the market today who asked if I’d be having those strawberries and without thinking I said, ‘Aye.’ The moment in church when a lady visiting, who had the misfortune to sit near me, tapped me on the shoulder at the end of the service and thanked me for my singing. I’ve discussed my singing before, an attribute about which I was teased a great deal at school – so much singing, so little of it in tune. But recently people have been saying how nice my voice is. I’m not sure if something’s happened to my voice, if the people in church are tone deaf or if I’ve always had a decent voice and the girls at school were just jealous. Whatever it is that’s happened there, I suddenly feel I can sing. I’ll take that and be happy!

This last fortnight, after the death of my uncle, I felt very low, about Dad as well as about him. Strangely, I’ve been seeing butterflies and rainbows everywhere. Butterflies, obviously, because it’s spring. Rainbows; I had a memorable journey back from Sussex to Suffolk this week; two and a half hours over waterlogged roads in bright sunlight. Lots of spray, car got a Sussex respray and was covered in white chalky puddle water stains, visibility was terrible, lights on but blue sky above and rainbows dancing around me everywhere pretty much the whole way home. That was a hell of a thing.

This is hardly a phenomenon, either, after all, it’s typical April weather really, showers then sun but it’s not something I’ve witnessed in quite such abundance before and it’s different to the norm so it makes for a change. Some ditzy article I read somewhere, which I can’t find now, of course, talked about about how butterflies are messengers from your guardian angel to let you know s/he’s listening, while rainbows are messages of reassurance from the cosmos. Butterflies are wonderful, they’re always going to cheer me up and as for the rainbows, well, when something is able to make a British motorway look beautiful then, dubious theories on cosmic reassurance aside, it’s still uplifting.

Then after a fair time with no reviews one from ‘An Amazon User’ for Few Are Chosen popped up this week. I always think that makes it sound like some kind of drug.

Sorry, where was I? Oh yes, the review. Actually, they left it two weeks ago but I only found it this week. It reminded me of something my brother in-law said. He thought there were two interesting, and slightly amazing, phenomena about the reviews of my books. The first thing he pointed out was that if you look at most reviews on Amazon, generally across the site, while some are superb far more are less than articulate. He felt a surprisingly high number of reviews for my books were witty and amusing, as if the reviewers loved the jokes in the books and are joining in. If that’s true, it’s a lovely thing for them to feel and I’m delighted it’s happened. The second thing he thought was intriguing is the fact that even the one-liners are reasonably well spelled and punctuated, suggesting a level of intelligence in the readers reviewing my books that is way above average.

Mwahhahahrgh! So there we have it. Congratulations to anyone who has read my books, then. Clearly you are very smart and arbiters of good taste! Phnark! It is a cheering thought though, because it makes me feel that I am reaching my intended audience; eccentric people like me. And if the people who feel moved to write reviews of my books want to join in with the jokes then maybe there is the possibility that the small beginnings of a community of … I dunno … K’Barthan-heads? Is forming. Maybe, or maybe not but it feels like a little seed of hope.

And I needed all those small things this week. You see, one of the hardest bits about the death of my uncle was the way it made me feel about about Dad. Sometimes, when I think he’s suffering or unhappy, I wish Dad wasn’t around, not because I want him dead but because it’s hard to see him suffer, it’s difficult not to see his disability as Dad going under and dragging Mum down with him. It’s horrible to think either of them is unhappy. Other times, when he seems cheerful, I see, with crystal clarity, that he is a man with a disability and I am being incredibly able-ist and condescending. At least it makes for a new topic to beat myself up over.

In a minor miracle this week, something in me was able to let a lot of that baggage go. Dad is, mostly, happy and enjoying life, as is Mum. That’s really all I can hope for. No doubt the worry will return but for now, I’m OK with the situation again, things are on an even keel. The house I grew up in is still a place of laughter and compassion. The rest is kismet, right?

Perhaps that’s all you need to do to be happy; look for the small gifts, be kind to yourself and be kind to others.

Who knows? I leave you with the review, because it was lovely. Thank you and Godspeed ‘Amazon User’.

Don’t Giggle Out Loud
You know when you are sitting in an airport and the guy next to you starts giggling at the book he is reading? And it’s so annoying because you can’t quite see the title? This is the book. The anti hero, The Pan, is terrific, his search to find the Chosen One before the ultimate baddy Lord Vernon gets his evil hands on her, The Swamp Thing, all go to make a refreshingly funny and well laid out plot. Oh and did I mention the car chase? or the lovely old man, or the drink that hits the spot, especially of the evil one’s soldiers? But that would spoil the story for you. Go read it yourself. It only has five stars as Amazon is tight with them.