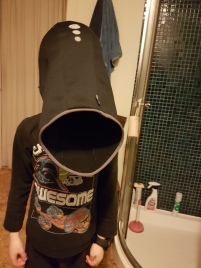 Over the holidays I thought it would be fun to tell some of the funny stories about my family. There is ‘Catching Socks’, ‘Night of the Homeless Man’, ‘Tale of the Drowning Toddler’ and a famous one about my Mum for which I have no title, as yet.

However, I thought I would leave that for later because obviously, it being the holidays, I have been spending a lot of time with McMini and at the moment, he is in absolutely tip top form.

Indeed, he is greater evidence than anything else I’ve encountered that anyone who wants their mind expanding should skip the drugs and just talk to a kid.

McOther has his usual pre-holiday work panic on so after managing to clear the decks for sports day he had to miss the pic-nic lunch.

So there we were, McMini and I, eating our sandwiches and chatting.

McOther’s reaction to this was to ask me if there was a source of mind expanding drugs McMini has access to about which we are unaware. But I think this is probably just how he is. I’ve never needed them, myself after all and McOther’s imagination is just as fertile so I guess it’s a given that McMini will come up with the kind of double dose that surprises even us.

Sometimes, McOther and I worry about what we have spawned …

Yesterday, I was happily minding my own business, reading the Searcher magazine on the loo when McMini appeared. It’s not so much you’ll never walk alone in our house so much as you’ll never cr- you get the picture, I’m sure. Anyway

‘I had a dream about you last night Mummy.’
‘Did you?’ I say. Uh-oh, I think. Dreams about me tend to involve my turning into some grisly monster and ripping his head off, dreams about his father, ditto.
‘Yes. It was quite scary, or at least it wasn’t exactly scary because it was funny but it was scary too. I dreamed I was in a kind of fairy tale. Cinderella was there but she had a black horrible face with red glowing eyes and she was dancing around and I accidentally went into her territory so she decided to kill me,’ – yep, her territory. I think we may have been letting him watch too many animal programmes – ‘But luckily you turned up, Mummy, and saved my life.’
Well that’s a surprise. I thought. ‘Oh dear,’ I said. ‘Still I’m glad I saved your life. Usually I kill you don’t I? so it makes for a nice change.’
‘Yes. But you nearly died. Cinderella had some zombie assistants, her ugly sisters were with her and they had crosses for eyes like when I draw dead people* and the Cinderella had a terrible secret weapon, she farted and that’s when you nearly died, the fumes nearly killed you but luckily I was there to save you by dragging you away.’ 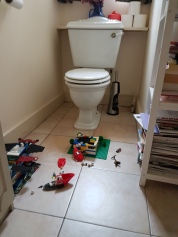 Have a kid and you, too, can have a loo like this!

When McMini plays video games, he doesn’t usually play the game that much, he spends hours dressing the characters in different clothes etc. He is clearly perfectly normal in this respect as the more recent the game the more secondary the actual game seems to be to all the extras, places you can go off menu, costumes you can unlock etc. But I found him playing Fifa 13 the other day.

‘Watch this Mummy!’ he said. Then as the goalie about to take a goal kick, he turned and put the ball in the back of the net. The game is not designed for people to do this so the Goalie then proceeded to put his head in his hands and look really upset. Which was kind of funny, in a surreal way.
‘What are you doing?’ I asked.
‘I’m being Chelsea. I don’t really like Chelsea so I have set myself up as Cheese McPiggyface, their player manager and I am making them lose so they are easier to beat next time.’
‘I’m not sure games work like that.’
‘Only one way to find out, Mummy.’ 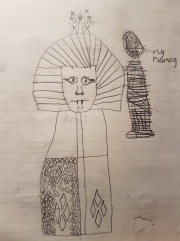 He also has a Ferrari driving game. To start racing you have to do some practise laps with Tiff Needell. McMini has never graduated to the actual racing bit. He drives the wrong way, backwards, into the wall and basically trashes the car.

‘What are you doing?’ I asked him.
‘I’m smashing the car. It’s hilarious! Look! I’ve cracked the windscreen.’
‘Why would you break a lovely Ferrari.’
‘Oh it’s much more fun than doing it properly, Mummy. Tiff Needell gets really cross.’

Ho hum … and don’t get me started on the weird stuff he puts in the freezer. 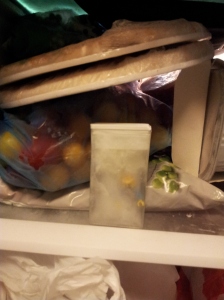 A lego figure in suspended animation. Our freezer is full of this stuff! 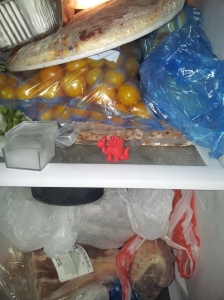 I dunno what’s going on here, more lego being iced along with a Kinder egg toy.

* And how The Beano draws dead things, too. Which is where he got it from I suspect.