Ladies and gentlemen, I have been nominated by the peerless Irish Farmarette a.k.a. Lorna Sixsmith, author of Would You Marry a Farmer, and general Irish mover and shaker, to answer four questions and introduce you to three more authors you might like. I have chosen people with new books due out or out not so long ago. I am particularly impressed that I have managed to pick an Englishman, a Welshman and a Scotsman after being nominated by an Irish woman. There has to be a good joke in there somewhere – but I’ve also added Yorkshire woman to liven things up. Kath won’t be able to answer the questions – because hers isn’t that kind of blog – but as I loved her book she gets a mention anyway. We go from rookie author to seasoned best seller and the stages in between with this lot via four of my favourite blogs.

Right, let’s get started. Here are my answers.

1. What are you working on?

Two things at the moment. First the final tweaks and polishes to the last two books in the K’Barthan Trilogy but also a completely new thing provisionally titled Space Dustmen. I also have a novel sketched out which needs writing up: Saving The World Is Not For Girls, so I’m tinkering with that, too.

However, my seems to require something totally new – and at the same time complicated perhaps it misses the sophistication of a world as fully developed as K’Barth was by the time I was done – and is being pretty insistent. So I suspect I will also trundle off into space with Driff and his fellow space refuse collectors. It’s all very strange but you know how it is, don’t fight it, go with the flow. So I am.

Yeh… that’s three things isn’t it and I said two. Well, I did tell you I couldn’t count.

2. How does your work differ from other stuff in your genre?

Sometimes I’m not sure it has a genre. Well it’s a bit of a mash up but so are a lot of things. It’s probably the only work of petrolpunk, mwah ha hhaargh! Yeh! I made up my own genre for it because I’m not full of myself or anything (snortle). I do tend to find that a line repeated in several reviews of Few Are Chosen, the first book in the K’Barthan Trilogy is, “there is nothing else like this book”. Which is kind of cool. But basically, it’s a humorous science fiction fantasy action adventure with romantic elements in books 2 and 4 – not squelchy bits romance, just a bit of snog action – but there is a love theme… and I’m digging a hole here. Stop.

Because I can’t help it. I know…. but that’s the truth.

4. How does your writing process work?

A very good question. Do you know, I’m not 100% certain. I build worlds in my brain. I always have, and once I’ve exorcised one onto paper I find others are quick to appear in its place. Hence the difficulty I mentioned with the what I’m working on question. I’ve dumped K’Barth for now, so I contain the Huurg Quadrant along with the Threeps, their political and moral system and the viewpoint of a student in London. However, what was three lines of dialogue and a picture of an aeroplane is rapidly coming upon the rails and threatening to turn into my next book. Ahead of the one that’s pretty much already there.

Alright, seriously, the actual process? It goes like this:

OK now it’s time to single out three other – lovely people to answer these questions. In no particular order, here they are:

Jim Webster standing in front of a hedge he made earlier.

That’s the best biog I’ve ever seen. But you may wish to know more, so here’s the longer version.

Jim Webster was born in Barrow in Furness on the 24th March 1956, the same day that Devon Loch fell at the Grand National and Dick Francis turned his attention to writing. With a teacher for a mother and a farmer for a father, Jim was thus able to read before going to school, could drive a tractor by the age of eight and was feeding calves somewhat earlier than that. Since then, he’s farmed, written freelance and acted as a consultant, sometimes managing to do all three in the same day. Jim is happily married since 1985; his wife Brenda and he have three daughters scattered about Northern England. He is immoderately proud of the fact that he has no CV, having been self-employed his entire life.

Jim writes a tip top blog about whatever pops into his head. His books are mostly fantasy, his current series based around the Land of the Three Seas, which are just ace. Don’t take my word for it. Find out for yourself here’s his amazon page.

However, Jim also writes science fiction and his first major release in this respect is Justice 4.1 the Tsarina Sector. If you’ve been paying attention you’ll have noticed he popped in here for a chat about it during his blog tour. Basically, I can’t give Jim enough plugs because I love his books.  So do have a look next week to read his answers to the questions. Jim’s fantastic blog is here and the Tsarina Sector Facebook page is here. It’s also for sale on Amazon UK here and US here.

Will Macmillan Jones. Don’t worry, he’s not chained to those railings.

Will Macmillan Jones lives in Wales, a lovely green verdant land with a rich cultural heritage. He does his best to support this heritage by yelling loud encouragement at the TV when Wales plays international rugby. Having been an accountant for much of his working life, he now writes in a desperate attempt to avoid terminal atrophy of his brain. A fifty something lover of blues, rock and jazz, he has achieved a lifetime ambition by extending his bookcases to fill an entire wall of his home office.

Will is best known, or is he notorious, for authoring the renowned Banned Underground Series, which I have thoroughly enjoyed, myself – think Spike Milligan writes fantasy and you’re nearly there. However, he has recently unleashed his inner 8 year old with Snort and Wobbles which you can find on Amazon here or if you’re in the good ol U.S. of A, here. In addition, he writes horror. More on that story, soon but it’s not out yet so I have to keep it under my hat.

Will blogs about a whole plethora of vaguely connected stuff – rather the way I do – and you can find his blog here. 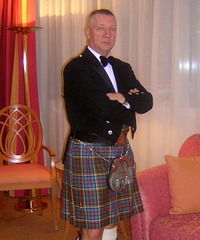 To quote his biography – Seumas Gallacher escaped from the world of finance five years ago, after a career spanning three continents and five decades.

As the self-professed ‘oldest computer Jurassic on the planet’ his headlong immersion into the dizzy world of eBook publishing opened his eyes, mind, and pleasure to the joys of self-publishing. As a former businessman, he rapidly understood the concept of a writer’s need to ‘build the platform’, and from a standing start began to develop a social networking outreach, which now tops 15,000 direct contacts.

He writes crime thrillers and the first two, the Violin Man’s Legacy and Vengeance Wears Black are impressively big hitters with more than 75,000 downloads to date. This, he tells us cheerfully, “blew his mind”.  He released the third in what has become the ‘Jack Calder’ series, Savage Payback, late in 2013 and is working on the fourth, Killer City.

His blog is an absolute hoot and I highly recommend it. As well as being funny it’s wise, witty and peppered with some very pointy-brained advice. And it’s also written the way he talks, which is in Rab C Nesbitt-ese because he’s from Govan. You can find Savage Payback on Amazon here and on the US store here. Seumas has just released a book of advice; Self Publishing Steps to Successful Sales, which explains how he went from net virgin to social media guru and seller of many thousands of ebooks in double quick time. You can find his blog with information about the rest of his books and links to buy them, too  here.

Epic reviewer, kicker of monumental butt for quality independent fiction and now author in her own right. Kath is an Amazon top 1,000 reviewer, chicken mother, stone polisher and gardener she even breeds tomatoes…. oh yeh, and she writes books.

Seriously, I kid you not there’s not much she doesn’t do. Her official biography goes like this:

Kath Middleton is no stranger to the writing world, having had several of her short stories published in anthologies and many of her drabbles published online and in ‘Beyond 100 Drabbles’, a collaborative book alongside author Jonathan Hill. ‘Ravenfold’ is Kath’s first foray into longer fiction, a book which she describes as mediaeval noir. Her many hobbies and interests include reading, gardening, geology, archaeology, patchwork and quilting, and keeping chickens. And, of course, she continues to write. Watch this space!

In the few moments of spare time she has, she also keeps a blog, Ignite Books where you can find out what she’s reading. She has an eye for a good book which is handy. She won’t be able to answer the questions because she doesn’t write that kind of blog but I’m nominating her anyway because I want to give her book a plug.

Kath’s book is Ravenfold is the story of Fourteen year old Romelda Bolt who lives at a time when a woman is a man’s property. Her parents, promised wealth by a local lord three times her age, marry her off. A brutal and bullying relationship is born…

Go and find it, now. You won’t be disappointed. It’s on Amazon UK here and on Amazon US here.

Filed under About My Writing, General Wittering