And now for something completely different!

This week, once again, we are striking out in a different direction, although, clearly it’s a slightly less different direction than it was last time because we’ve done this once before. Today, we will be taking a pleasant and rambling detour to Port Naain in the Land of the Three Seas with our friend and poet from a couple of weeks ago, Tallis. This week, I’m sharing a complete tale. As well as appearing in the Port Naain Intelligencer series, Tallis also appears in his own series and on his own blog, no less. I have no idea how Jim Webster finds the time to write all this stuff but as you know, I always enjoy Jim’s books, so a chance to share this one was too good to miss! It also has an extremely apposite title for the condition of yours truly, pre holiday. Enjoy! 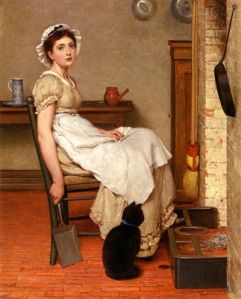 There are disasters that can strike even the most well organised entertainment. Some you can plan for and seek to avoid. Some you can watch out for and step in immediately to nip trouble in the bud. Others seem to strike out of the blue.

If I was apportioning blame, the temptation would be to give a generous helping to Mesdames Mudfold and Cockeren. There again Almas Slackwater cannot be held innocent of blame. Finally I would point the finger firmly at Bethan Phloom who was the hostess and failed to keep control.

To be fair, everything started well enough. The hostess was gracious, people were pleased to be invited, and there was a genuinely pleasant atmosphere. Then Madam Mudfold arrived in a nice dress. It was in silk with a rather interesting floral pattern. The hostess commented on it, others passed equally flattering comments, and Madam Mudfold was delighted. To be fair, she was entitled to be; it was a really nice dress and suited her perfectly.

Five minutes later, with Madam Mudfold barely out of the entrance hall, who should arrive but Madam Cockeren. Now I know these two ladies have had their differences in the past. I am willing to admit that the term ‘feud’ adequately described their relationship.

Still, of late they have been genuinely restrained, behaving with reasonable dignity and even some decorum. Personally I suspect husbands ended up getting involved, mainly due to the risk to life and limb that the feud occasioned.

Now at this point Madam Phloom as hostess should have done something. As it was she merely had a fit of the vapours and left me to deal with it. Still, that is why I was there. As tactfully as possible I explained the problem to the two ladies, separately, and they agreed to remain in separate rooms and to let me know if they needed to move from one room to another. Thus they need not ‘accidentally’ meet each other.
It’s a scheme I’ve used a number of times and with good will on both sides, it works nicely. I personally had no doubt that it would work equally well on this occasion. Madam Mudfold was in the first floor parlour; Madam Cockeren was in the first floor salon.

And then Almas Slackwater arrived. Alas, she too was wearing the same dress. Unfortunately Almas, is almost a full generation younger than the other two ladies. Now I have heard her described as winsome. Personally I would describe her as charming, witty, and fascinating; others have used the terms ‘frenetic’ and ‘maenadic’.

So whilst the other two ladies could feel assured that they looked elegant and attractive, Almas looked stunning. When she walked into the room one elderly gentleman muttered to me it was as if spring had arrived two months early.

Unfortunately, she arrived just as Bethan Phloom had recovered from her fit of the vapours, and had returned to duty welcoming her guests. She took one look at Almas and fainted clean away. We carried her to her room and she plays no more part in the proceedings.

Almas proceeded to blaze a trail through the house like a comet. She swept through every room, leaving the ladies feeling inadequate and the gentlemen feeling overwhelmed. To be fair to her, it’s just something that happens in her presence, she doesn’t need to work at it. Finally I met her on the hallway and asked her about her latest work. She is a very promising young poet. This distracted her and allowed the rest of the guests to get on with enjoying themselves, until the bell rang for supper.

Now supper needs some explanation. Bethan Phloom had inherited a cookery book from her grandmother. Whilst Bethan and her mother had done well in the grocery trade, grandmother had been in service as a cook and was apparently a really good one. The book Bethan had inherited was the old ladies collection of custard recipes and Bethan had decided to have an evening of custard. We would have a chance to taste over fifty-seven different flavours and textures of custard.

It was then, as custard was served, that everybody had to move into the same room and mingle. Mesdames Mudfold and Cockeren were careful to ensure there were always people between them and so they weren’t forced to acknowledge the other. To be fair to them they managed to achieve this without appearing to snub anybody, and frankly I was rather proud of them for achieving this and making my role so much easier.

The Almas arrived in the dining room. Not only did she go and stand right next to Madam Mudfold, she even examined the other lady’s dress to see if the stitching around the neck was the same. Madam Mudfold was mortified. It wasn’t merely that Almas was wearing the same dress, she was wearing it infinitely better. I felt sad for the older lady. The dress suited her. I suspect she had loved it, but I knew that she would never wear it again.

Then as Almas moved away, she seems to have inadvertently bumped into somebody, who in turn stumbled and knocked somebody else. The upshot of this was that strawberry custard was poured down the front of Madam Mudfold’s dress.

Madam Mudfold didn’t hesitate. She put two fingers into her mouth, emitted a piercing whistle which caused everybody, including Almas, to turn round. She then hit Almas full in the face with a carefully hurled bowl of caramel and ginger custard. To be fair, it was an excellent shot. People applauded.

Almas rallied, fell back to another table, and proceeded to send volleys of thick-set summer-fruits custard tarts in the direction of Madam Mudfold. Unfortunately, perhaps because of the custard dripping down her face, Almas’s aim was not perhaps of the best. Whilst all the tarts hit, not all of them hit Madam Mudfold. Others joined in, a number of younger ladies rallied to Almas, whilst Madam Cockeren led a party to rescue the now much beleaguered Madam Mudfold.

The older ladies drove their younger opponents down the stairs, but at the kitchen door Almas rallied her forces. Re-equipped with individual custard pies, they counterattacked. The battle raged up and down the stairs, into the kitchen and out of it, until at least, vanquished, Almas and her legions retired, gloriously custard-besmeared, into the night. The older ladies, realising the damage that had been done to their garments, bid each other an affectionate goodnight, and also decamped. The last to leave were Mesdames Mudfold and Cockeren who were arm in arm as they went to find where their sedan chairs had got to.

This left me with Sina the maid and Cook. Bethan Phloom remained firmly in bed, so it fell to the three of us to clean up. It took us nearly nine hours. I washed custard of the walls and shovelled it into bins whilst the ladies cleaned the floor behind me. Then Cook retired to clean the kitchen whilst Sina worked her way through the other rooms that hadn’t been plastered with custard, whilst I finished off washing carpets and similar.

Finally, long after dawn I went into the maids’ parlour to find Sina had put the finishing touches to the fire there. She was preparing for a new day. I went into the kitchen to discover that Cook had made coffee but had fallen asleep before she could offer us any. So I took two mugs of coffee, added cooking brandy to both and went back to the maids’ parlour to give Sina hers.

As she drank half of it she leaned back in the chair.

“Mr Tallis, yesterday my young man asked me to marry him. I told him I’d think on it.”

I waited whilst she emptied her mug in one long swallow.

“You know what, Mr Tallis. After last night I’m going to tell him, yes.”

I congratulated her, took the empty mug off her and went back to the kitchen with our two mugs. On my way out again I glanced through the door of the parlour. Sina was fast asleep.

And the hard sell!

Welcome back to Port Naain. This blog tour is to celebrate the genius of Tallis Steelyard, and to promote two novella length collections of his tales.

So meet Tallis Steelyard, the jobbing poet from the city of Port Naain. This great city is situated on the fringes of the Land of the Three Seas. Tallis makes his living as a poet, living with his wife, Shena, on a barge tied to a wharf in the Paraeba estuary. Tallis scrapes a meagre living giving poetry readings, acting as a master of ceremonies, and helping his patrons run their soirees.

These are his stories, the anecdotes of somebody who knows Port Naain and its denizens like nobody else. With Tallis as a guide you’ll meet petty criminals and criminals so wealthy they’ve become respectable. You’ll meet musicians, dark mages, condottieri and street children. All human life is here, and perhaps even a little more.

More of the wit, wisdom and jumbled musings of Tallis Steelyard. Discover the damage done by the Bucolic poets, wonder at the commode of Falan Birling, and read the tales better not told. We have squid wrestling, lady writers, and occasions when it probably wasn’t Tallis’s fault. He even asks the great question, who are the innocent anyway? 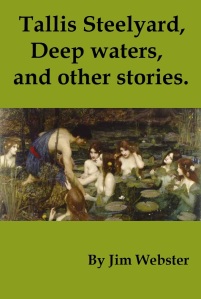 Click on the picture to find out more or use the link below!

And then there is:-

Tallis Steelyard. Playing the game, and other stories.

More of the wit, wisdom and jumbled musings of Tallis Steelyard. Marvel at the delicate sensitivities of an assassin, wonder at the unexpected revolt of Callin Dorg. Beware of the dangers of fine dining, and of a Lady in red. Travel with Tallis as his poetical wanderings have him meandering through the pretty villages of the north. Who but Tallis Steelyard could cheat death by changing the rules? 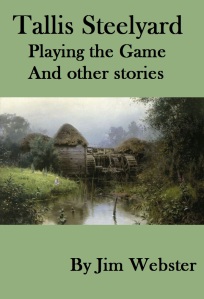 To find out more, click on the picture or the link below.

If you want to see more of the stories from the Land of the Three Seas, some of them featuring Tallis Steelyard, go to Jim’s Amazon page by clicking on the link below, it should take you to his page on your local Amazon:

19 responses to “And now for something completely different!”