I love the New Year. Christmas is over and I am home free. You know how, if you let a bee out of the window it flies miles up into the air as if it’s delighted to have escaped.* Well, yeh, I feel like that.

* Obviously, it isn’t delighted to have escaped. It’s a bee. It’s actually going up there to orientate itself and find its way back to its hive but there’s no harm in a little Victorian-style anthropomorphising of animals every now and again if it’s sensibly done. Phnark.

Anyway, where was I? Yeh. Today, it being Sunday, and the feast of Epiphany (when the 3 kings arrive) I went to Church. I confess, I like church. Maybe it’s because, as a classically trained musician, few things appeal to me more than singing loud shouty songs in a situation where nobody can be rude about my horribly loud corn craik like voice (because that would be unchristian! Snortle.). It’s also quite mantra like, doing the same thing again and again. And it’s calm. Church is where I get time to reset my head. 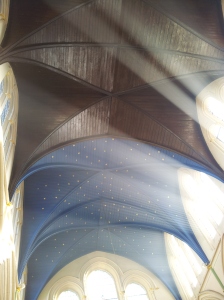 This week, I was mulling over my life this last year. I think I can safely say that 2016 has been pretty grim for me personally. Famous people dying didn’t even hit my radar, even the racism and bigotry round Trump and the Brexit campaign was eclipsed by personal events; my Mum beginning to lose her memory, discovering that Dad has alzheimer’s and that he was diagnosed FIVE YEARS AGO! But they didn’t see fit to tell us until September, thereby denying us so many options, things that might have made it easier, or given us a year or two extra with him, the whole of him.

Then there was having to do three mercy dashes when Mum went into hospital. Organising 24 hour care, sorting out enduring power of attorney over my Dad’s side of their joint account so I can help her with the finances, making the 280 mile round trip every Wednesday. Having to let go a succession of very lovely 24 hour carers for no other reason than Mum didn’t like having them there and I needed to show her she could trust me, that I was listening to her concerns. Helping her to gradually adjust and accept them … watching her deteriorate and then rally. That one glorious visit when she was better than I’d seen her for two years a few days before she got really sick. Watching her lose the power of speech, twice. Sitting in hospital with her the second time, wondering if she was going to die, knowing she wouldn’t want to without regaining enough speech to actually say goodbye. Visiting her and finding the hospital deacon there and Mum, still unable to talk, silently crying. Knowing that every bit of sadness I feel about her and Dad is felt to the power of hundreds more by her, because he’s her husband and she thinks that if she dies before he does she has failed him.

Watching Dad deteriorate. Trying to be a jolly, kindly mother to my boy and wife to McOther. Trying to see the good stuff in my life – which is there in abundance, by the way – on the days when the parents thing is just too much and I want to crawl away and cry.

If I’m honest, it’s been fucking awful. And it’s not going to get any better but I think that, maybe, I will.

Today, in church, I had a bit of a … well … epiphany – very apposite on the feast of Epiphany – what I would personally call, a Wenlock Edge moment.

Wenlock Edge is a poem by A E Houseman. It’s a belter if you’re down. Basically, he’s watching a gale blow across the trees on the side of a hill but that’s just the surface. There’s also some kind of upheaval going on in his life and he feels torn and battered like the trees. And he looks at them and realises that people will have been able to stand where he is standing and see pretty much the same view for thousands of years. He speculates that some of them must have been in the same, or similar, doo-doo to him but they, and their troubles, are long gone and he will be over his troubles one day, too. It’s very much an, ‘and this, too, shall pass,’ kind of vibe and very good.

So there we were in church, singing a carol called, A great and mighty wonder which I love because it’s early music and I love the way they mess about with syncopation and speech-like rhythms. And as I said, I love music and I love to sing. I noticed that the tune was arranged by someone who lived from 1572 until 16 something. This is another thing I love about early music, of course. When you’re standing (or sitting) singing a tune that’s over 500 years old, or, as in the case of another one this morning, a new tune with words that are over 1,500 years old it’s kind of cool. And there are so many. The oldest I know of, of the top of my head, is Of The Father’s Heart Begotten. Words: 4th century, music: 11th (rearranged obviously). Now that is fucking old.

Anyway, back to the carol. I’m singing it and it makes me think how many millions of people, all over the world, have sung this tune before me during the last 500 years. I wonder who they all were, and if any of them were sad about the things I’m sad about, and then I realise that of course some were, because with that many people, it’s a given.

That’s the moment when the lense through which I view my life suddenly pans out.

That’s the moment when you are hovering at ceiling height in the office block of your being, looking down on the cube farm of your existence and seeing more than just the bubble of emotion you are sat in.

That’s the second when you see all the other colours in your life and how they shimmer and glow and interconnect. And that, for me, is usually the moment when I suddenly realise that everything is OK. Or in this case, that I’ve achieved a lot more than I thought. That I’m stronger than I realised. I’ve done alright.

And it feels affirming, uplifting.

Because this time last year, I was worried sick. I’d spent Christmas with my parents, my Mum was getting forgetful and was not very well, her friends and the lovely peps who help her garden, help her clean the house, and who come in and look after Dad. All of them were worried. I was worried. Mum and Dad weren’t safe on their own. The long process of persuading them they needed live in care began.

And I remembered that and I contrasted it with the way I feel now.

And it was surprisingly better!

OK, so watching people you love die the death of a thousand tiny mental cuts … over a period of 8 years and counting … is not a process I recommend for the maintenance of a 24 hour joyous disposition. Yes, there is still the sadness and there is still the pressure. So much to do, not much time to do it in, the requirement to make weekly visits and be a nice mother and wife and funny and good company when I’m actually rather sad a lot of the time. Then there’s the making sure that there is room for grief but that it doesn’t become a habit.

Amazingly, what I realise is that I’m coping. I love and am loved. And there are still good times too. And for all my banging on about looking back on things regularly in my writing, about making sure I realise how much progress I’ve made, about how we should all do that, in this crucial personal thing, I haven’t. I haven’t done it in my writing either.

Achievements for 2016 then. My parents are in their own home where they want to be. They are warm, cared for and looked after by a bunch of folks who love them almost as much as my brother and I do. They are as happy as their circumstances will allow. They are supported and safe. And me, I’m as happy as I can be that I’ve done right by them, done for them what I’d want people to do for me, made it possible for them to live the way they want, where they want, for as long as they are able.

I’ve done what I can. And suddenly, in today’s Epiphany epiphany, my Wenlock Edge moment, I realised that I’ve done enough: enough to ensure I can live with, and like, myself as a person. I’ve done OK by them. And I’ve done OK by me because even through all the chaos I’m still writing. I’ve been Mummy and Dutiful Daughter but I’ve also, just, clung onto Mary.

And I hadn’t realised that until this morning.

And it feels good.

There’s a humorous science fiction fantasy authors giveaway running until Tuesday, I think it is. You can win $42 cash equivalent or gift voucher, a box set of the Hitch Hiker’s Guide and paperback books from five humorous sci-fi fantasy authors. One of them is me. You can find that, and enter if you like here.