What I am about to confess paints me in a pretty poor light, so if you’re squeamish about people with low hygiene standards it’s probably best you don’t read this. Likewise, if you have the well-trained, well-behaved pets, or the smallest iota of pride in yourself, look away now.

These are photos of my cat, Harrison. 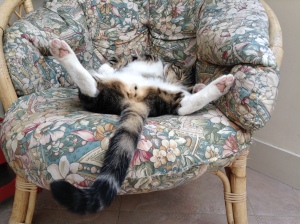 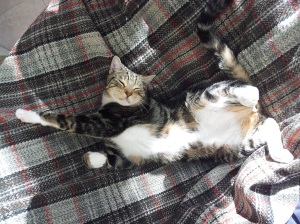 Butter wouldn’t melt, would it? 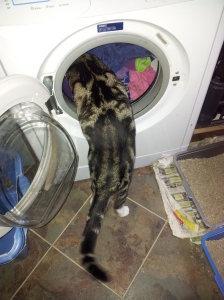 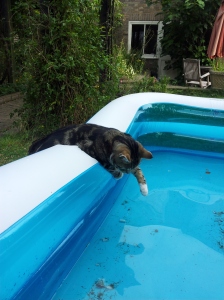 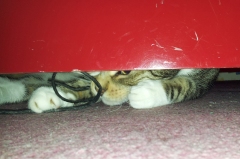 Unfortunately, Harrison is also a thief.

He’s not a small time thief either. He has utterly failed to grasp the concept of the word, ‘No’. He is a delinquent. For example, of all the places available to him to go, he chooses to visit the garden of the next door neighbour who is allergic to cats. I have tried to stop him but he climbs a 15ft trellis like a ladder and strolls over. Short of electrifying it I can see no way to stop him. Yet I feel I should be able to make him understand, because I could have done with the other cats I’ve owned. But this one, no. I am a bad cat mother.

McOther is under the cosh at work and yesterday I decided it would be kind to sort out dinner – usually he likes to cook. As I did so, I noticed that a spare steak (barbecued) had been in our Fridge for four days. I couldn’t help thinking that, while I was sorting out left overs lamb spag bol, I could make a steak one too and freeze it for us to eat next week. So I got the plate out. But then McMini wanted something and I went to help him.

Then I realised I’d left a fillet steak, unattended, in the vicinity of our cat. I swiftly returned to the kitchen and …

The steak was still there.

Wow, I thought. Yes, McCat could only be in one place, pestering the poor woman with the allergy next door. Because if he was round ours, the steak would have gone. Either that or he was down the road in Tesco’s trying to get out of the cold meats section with a whole roast chicken. Anyway, I cooked, undisturbed. Then, lulled into a false sense of security by the continued (apparent) absence of our cat, I went and put some onion skins in the compost. When I came back I went to get the steak to mince it up.

‘Bollocks!’ I shouted (quietly because I didn’t want McMini to hear).

‘Have you seen Harrison?’ I asked McMini.

‘No. Did you just say “bollocks” Mummy?’

‘No. Why would I say that? Must go, I think Harrison’s got the steak.’

Hmm, it had been there a moment ago, I knew the little blighter couldn’t have gone far. I ran outside. No sign, then I looked round the side of the porch and there, fillet steak hanging from his mouth, was McCat. He greeted me with a delighted look-how-clever-I-am brrrp.

‘BAD BOY!’ I shouted and smacked him, to what was, quite obviously, his total bemusement.

I seized the steak and went inside. Immediately I was gripped by remorse. He doesn’t understand that hunting on the kitchen side is verboten. I have always been able to make other cats understand very easily but this one has no clue. I examined the steak. It was a little damp one end, with four obvious canine tooth holes but otherwise, apart from two blades of grass on the bottom, it appeared to be undamaged. I had a think and then I cut the dodgy bit off. I felt like an abusive husband trying to make up as I put it in the cat bowl and left it at the perpetrator’s food station. Because bad cat or not, I detest waste.

As for the rest of the steak. I wiped the blades of grass off it, ran it under the tap, patted it dry and, yes, I’m afraid I minced it and bunged it in the sauce!!!!!

Then I boiled the sauce.

For half an hour.

When I say boiled, I mean boiled. So hard that some of it spattered onto the ceiling, which was fun to wipe up.

Then I tasted it.

And it was good. But I had a conundrum. I had made a lovely sauce, but I certainly wouldn’t want a cat mauled steak served up to me at someone else’s house. OK, so one of my Mum’s mates served a pheasant her cat caught but it was not mauled and clearly brought to her as a gift: laid out on the kitchen step, bite-mark free, with nothing more than a wrung neck. That was different.

So I fessed up to McOther. Who refused to eat it. So it really is my lunch for today and next week.

I should throw it away, but it’s tasty. And it is most definitely pasteurised. On the downside, I might get worms because although our cat is wormed regularly he has vile habits, and if he does have worms I’m not sure how boiled worm eggs have to be to die. On the upside, at least if I do get worms, I’ll lose some weight.

So I’ve eaten some.

And it was still good …

But I’ll be checking my stools.

Please don’t tell me I’m about to die.

Tagged as M T M Makes a complete tit of herself, M T McGuire, off topic