Well, this has been an interesting week. For better, or worse, Britain has voted to leave the EU. As a mum with an 8 year old in a local state school with a very wide range of nationalities attending, the majority of voters asked in my extensive Playground Polls came up Remain.

There is a reason. This: 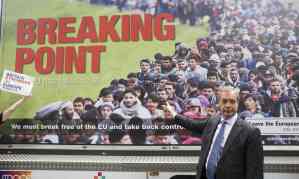 A lizard with opposable thumbs in front of a racist poster.

In the absence of any real facts, and after right wring extremists murdered an MP for her pro-IN, pro-refugee, humanitarian beliefs, it was all about sticking it to the racists for us. So what I saw winning, when Leave won, was fascism and a sheep like mass of people voting the way they were told to by the Sun.

And we’re at the beginning of the century, the world economy went down the toilet a few years ago and is still only recovering. And despite that recovery it’s left a lot of people in deep, deep financial plop. Which is a worry. Because that’s the kind of climate in which fascism takes root as folks look for someone to blame and some of the rhetoric flying around about immigration and letting in refugees is … disturbingly familiar.

However, I have a handful of highly intelligent, sensible friends voting Leave. They’re good people, decent people, one is about where I am politically, one way to the right but the other two are further left. They are never going to vote for racism, no way, no how – even the right winger. So I asked a couple of them what the hell they were doing.

They put forward lot arguments which made sense – but all the arguments for both sides make sense when you uncover the facts that’s part of the trouble – but the salient point was one about how they believe the people of this country feel about politics.

Which is, that our politicians are condescending, aloof, self important and that they no longer listen to, nor have any respect for the people they are supposed to serve. My Leave friends felt that through the gradual change, over the years, from debate over the issues to personal attacks, most politicians have not so much lost our respect as earned our contempt. We believe what they say about one another. That’s why so many young people don’t or won’t vote, which is bats of them but that’s another story.

Furthermore, many leavers are every day people, but poor people, the folks who feel disenfranchised and without hope, because successive governments have stood by and let their places of work – in some cases, whole industries – die. Leavers are people who worked in our pottery industry, our coal industry, our manufacturing industry, dairy farming, fruit growing, the Cadbury factory, the steel industry. Most of our heavy industry was up north. And that’s why the folks up there are angry. The big agricultural areas in East Anglia voted Leave too. And a lot of the seasiders.

They feel that when their livelihoods and their whole communities were at risk, successive Governments, labour and Conservative stood by, didn’t step in, didn’t help. Failed them. And yes, there are probably more positve things to do than concentrate on your anger and bitterness about a past that is gone and a future that cannot be. But maybe they were just trying all that time to get someone, somewhere, to listen. And heaven knows, I graduated into a recession, I felt washed up, useless, dismissed as junk before my working life even began so I can actually really sympathise with that.

And so when the government asks for their help now their reply was a resounding fuck off, in this case, in the form of a Leave vote, to sock it to the Man. Whereas we in Remain, even if we’d thought of it, would probably have demurred from socking it to the Man when it’s just swapping one Man for another.

I suspect many people, both those voting IN and those voting Leave, may well share some very similar sentiments about our politics and politicians. We just reacted in different ways.

And in that one thing, lies our hope.

MPs have to learn from this, they have to start believing again, they have to relearn humility, that they are public servants, that it’s not about power for them but about working for us. And those who take such things seriously need to make sure that we, the electorate, realise that they, at least, are listening. They need to be Jo Cox, not Boris Johnson.

And as for tomorrow. What’s done is done. This is complicated, and it will be difficult. A lot depends on the negotiations surrounding exit. I hope Scotland and Northern Ireland give it some time to see what we come out with before they vote to leave and the UK is broken. Because it looks as if we, Britain, might actually have a chance at a new beginning, a new start. It’s up to us. It doesn’t have to be about racism, immigration and bigotry. It can be about unity, it can be like the 2012 Olympics.

Because for all my initial horror at the result, and for all the wailing and gnashing of teeth I’ve done on Facebook with my like minded friends, when we get to the bottom of things, it turns out that despite being on opposite sides of the debate, many of the folks who voted Leave are closer are closer to us than we think. And if they are we can work with that.

A couple of good pro remain posts from writers, like myself, who hadn’t even thought of sticking it to the Man:

Chuck Wendig the thinking American’s view: http://terribleminds.com/ramble/2016/06/24/you-want-trump-this-is-how-you-get-trump/
Charlie Stross sums up the initial feeling in Remain at the result: http://www.antipope.org/charlie/blog-static/2016/06/tomorrow-belongs-to-me.html
Lee Harris – just a nice cynical post about the Remain point of view. http://leeaharris.com/brexit/
I need to comment on these.