A bit of a bum day today. Things have been rather hectic recently – you may have noticed this from the distinct lack of posts but Real Life has thrown me a bit of a curve ball.

As you know, if you read my drivel regularly, my Dad is not too good. He has a heart murmur – actually it’s called something I don’t know how to spell; an atrial affribillation. My Mum, meanwhile has an atrial agitation – seriously I shit you not it is called something along those lines – which sounds like exactly the same thing with a different name. Both are caused by pacemaker cells – the things that make your heart beat. These should give out an electrical impulse all at once causing the muscles around them to contract and your heart to pump. In the cases of both my parents, the pacemaker cells are firing off at different times, causing the muscle to just kind of… jiggle rather than squeeze in a nice neat contraction. This means the blood doesn’t go round the body efficiently.

My Dad is not getting enough blood to the head and is having a lot of short term memory problems. My Mum was his sole carer until recently and her problems have only started up in the last couple of years. They have lots of people round them who love them almost as much as me and bro do but… they’re a long way away.

On Wednesday, I saw them both for lunch and they were on great form, despite the fact that Dad fell over on the lawn. Mum and I got him up and the three of us laughed and joked about it afterwards. He was much more compos than usual, didn’t fall asleep and it was really like a visit to both parents. Kind of a gift.

Thursday morning he fell in the shower. The long and the short of it is that he went to hospital to be checked out, came home and then on Friday evening, had to go back. The daughter of the lovely lady who is officially Mum and Dad’s ‘cleaner’ but is oh so much more than that, had spotted the ambulance and they were both there with Mum and Dad at the time I rang, about to leave. McOther was at a wine dinner somewhere in Cambridge so I couldn’t do anything, anyway, until he got home: E.T.A. half 11.

Lovely lady rang my brother and he went down. This morning when I rang I got the low down. Dad’s blood oxygen is very low but at the same time his heart is racing. This is not a state of affairs that can continue long term. So they may stabilise him, and this may just be another visit to the hospital. Or, it may not. They’ll know more this afternoon so until then, all I can do is wait. So here I sit, preparing the house for dinner as if it’s all going ahead, as if I’m going to be here.

I’ve put the washing away, done the beds, fed McMini his lunch and now I must clean the floors and clear my guff out of the conservatory, where we’re having dinner – or will it be they? I don’t know. It’s the most bizarre disjointed feeling; limbo. Such a normal day and yet, so extraordinary. Preparing to think, to act and possibly even to grieve while, in the meantime, acting; filling my minutes with things to do, so as not to do any thinking. It’s a bit like the time when, as a kid, I wanted to ring my friend in Guildford and forgot the code, I had a bit of a spelling block while looking it up and ended up ringing a woman in Guilford County Armagh. Everything was right and yet… not.

I know that if this one is goodbye, my Dad will want me there. So I have to cue in back up, even though I’m unlikely to need it. I have to make sure I can go, even if the chances are I won’t have to. And so the hours tick by and I wait. Ready but actually, really not ready. Not ready for this at all; though it’s been coming for months and I fear that it might, now, be happening for real.

Between you and me and the gatepost, I feel I’m being a bit of a drama queen. But if I’m not around for the next couple of weeks, you know where I am.

In the meantime, here’s a picture of next door’s cat (Chewie’s Girlfriend, as she’s known to us because Chewie would let her into the garden but no other cats). What on earth she’s seen I don’t know but she’s been staring at that drain for hours. 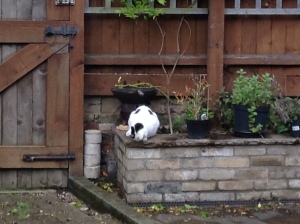